A Traveller’s Insatiable Search For Belonging

By the time I arrived in Ayacucho, I had lost count of how many days it had been since I last heard another voice speak English.

Despite being just 12 hours’ drive from Cusco – which, in Peru, means it’s practically next door – Ayacucho is the twin that its famous brother never knew it had. 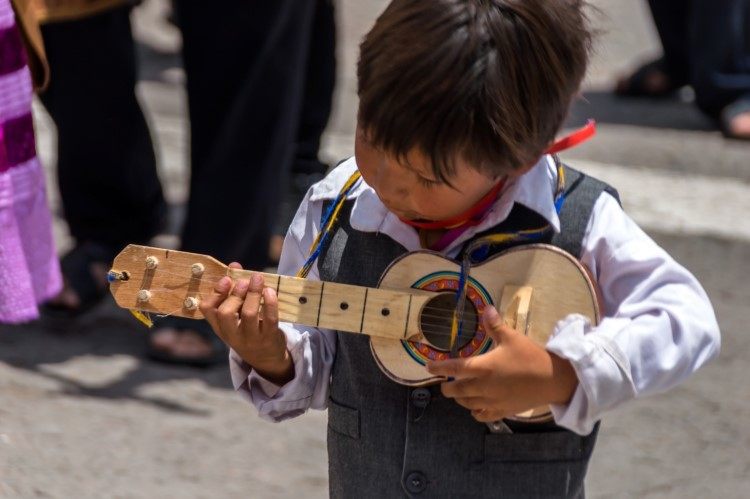 Although evidence of Inca occupation in Ayacucho is few and far between, in terms of colonial architecture, it is equal, if not superior, to Cusco. 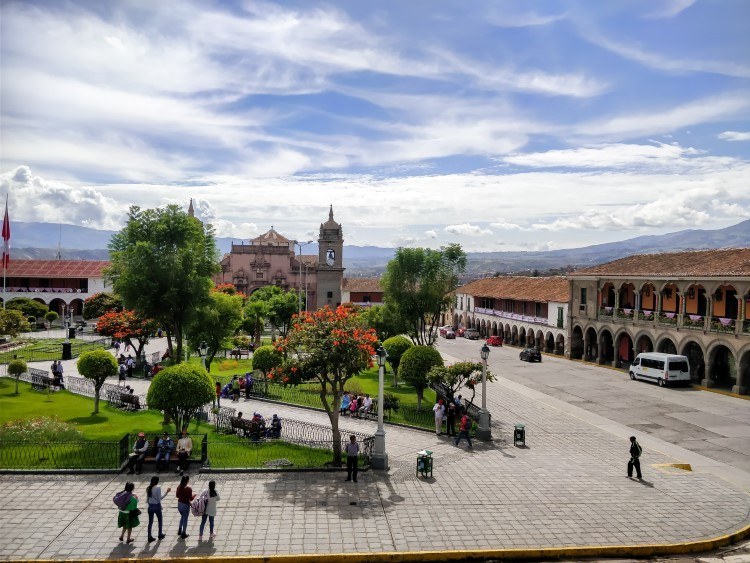 The Plaza de Armas in Ayacucho, one of the finest in Peru.

But few come here. I saw no other tourists among the mingle of local people, now gathered in small, excitable clusters around the main square.

I wasn’t complaining; for me, travel is most thrilling when it’s to a place where few others go. I know that this feeling harks back to the great age of exploration and a glorious list of adventurers: Ferdinand Magellan, Diego de Almagro, and later Charles Darwin and Earnest Shackleton, who sought knowledge, danger and, in many cases, gold.

But unlike these white men who sailed the oceans, I have become aware that I’m instead driven by something that certainly wasn’t their imperative. I seek a sense of welcome and belonging.

A festive, irresistible atmosphere in Ayacucho

I was in Ayacucho for the update of the Rough Guide to Peru, which had seen me travel across the entire north of the country, from Trujillo to the border with Ecuador north, and east to the dark, dense boundaries of the Amazon jungle. From here I’d moved south, covering Tingo Maria all the way down to Huancayo, where I’d been stuck for a week thanks to farmers protesting against the sorry price of potatoes.

Compared with the bonfire scorched streets of Huancayo where cobbles had been prised up from the roads to be hurled at policemen, Ayacucho had a festive atmosphere. This was centred around the Plaza de Armas, with the surrounding streets thick with people.

Families strolled leisurely around the square, toddlers perched for better vantage on shoulders; groups of school children leapt excitedly around, wild with the sugar of the treats being hawked from wicker baskets by hoarse vendors.

But the most eye catching of all were the dancers, gathered in colourful troupes in front of the Cathedral.

Each wore their own distinctive style of dress, reflecting the traditional clothing of their home towns. The women were dressed in a kaleidoscope of poleras in all different colours. These wide, heavy skirts were topped with simple cotton blouses, while on their shoulders, thick llama-wool textiles dyed in vibrant stripes of colour were slung to form a bag. On their heads, two long plaits of black hair escaped from black felt fedora hats. 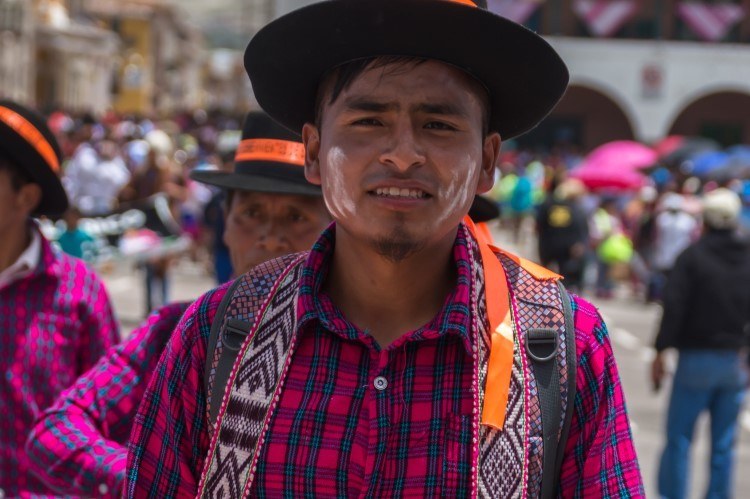 For the men, loose black trousers and smart shirts were combined with fedoras, many with woollen socks beneath rubber sandals or a scratchy poncho draped over their shoulders. Others wore thin slices of material, woven into colourful streamers of cloth that were sewn to the front of their jeans and floated and fluttered when the men jumped.

Among them, musicians blasted Andean melodies on quena flutes, guitars and animal skin drums, the music from each disparate group rising into a cacophony of sound, jarring against those of their neighbours.

Each group was a riot of movement, sound and colour.

I found a spot beneath one of the colonnades lining the Plaza de Armas, squeezing into a space among the growing hordes of assembled spectators and watching with fascination. I had heard tell of Ayacucho’s fervent festivals but had not realised that as my visit came a few weeks before Semana Santa (Easter Week), then it might coincide with the celebration.

A woman and her teenage daughter next to me were as riveted as I. I asked them when the parades were due to begin. The mother shrugged, saying they themselves had come from a town a few hours’ distance away and weren’t quite sure.

“But it’s going to be good,” she assured me, with an enthusiastic smile.

A welcome by a stranger

As I tried – and failed – to snap some surreptitious photos of the performers, I glimpsed one of the dancers peering across the heads of his circle of companions at me. He caught my eye and waved, his hand making a beckoning gesture. I looked back at him, before turning to stare at the spectators around me, convinced he was encouraging a friend to join them.

He did it again, and this time it was clear that he was communicating with me. As someone who tries, and fails magnificently to blend in with the crowd in South America, the thought of drawing even more attention to myself by joining the dancers below didn’t feel like the most attractive prospect.

But he was insistent. I gave in, picking a way down the steps to the cobbled street below, where the circle parted to receive me.

Curious teenage faces peered across at me beneath their fedoras, many breaking out into grins at the baffled-looking gringa stood before them. 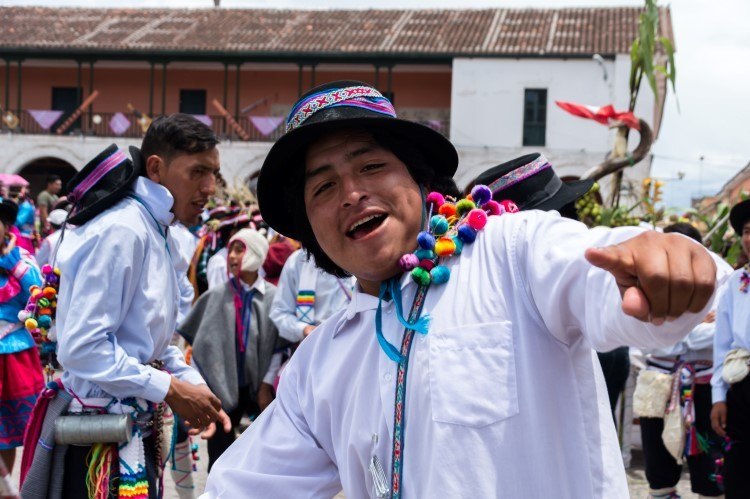 Spirited Rogelio poses for a photo before we start dancing.

Rogelio stepped forward and introduced himself and his friends, all high school students from the city. “We want you to join us as we dance,” he told me, peeling the hat from his head and placing in on my own, where it sat uncertainly, far too large.

I said no, multiple times, but it wasn’t the right answer and soon I was being instructed in the dance that we would do in a few short minutes when the procession of dancers finally began its route around the plaza.

Finding a sense of belonging

It was only when we started out that I realised quite how hot it was, the sun blazing down onto the back of my neck as I joined Rogelio between two rows of twirling, stamping and shouting dancers. The musicians brought up the rear, the sharp, clear notes of their flutes slicing through the air.

We started at a slow trot as we made our way along the northern side of the square, heading for the western edge where the majority of crowds were gathered. Many lurked beneath the overhang of the buildings in a bid to escape the fierce sun.

As we reached the assembled crowds, the pace picked up and I heard Rogelio next to me belting out the words of the Andean music. A mix of Spanish and Quechua that I didn’t understand swirled and dissipated into the air as heavy skirts twisted and spun and thick ponchos followed suit. 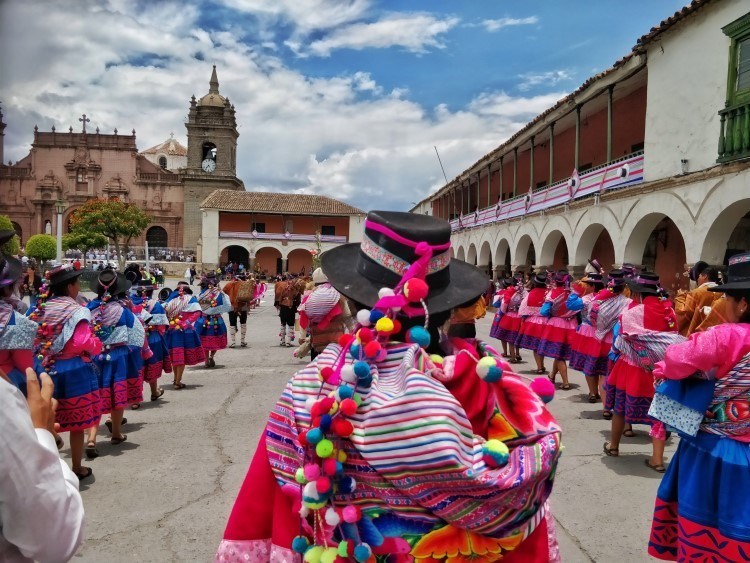 My view behind rows and rows of local women dressed in magnificently vibrant Andean clothing.

I did the same, stamping twice here, spinning once there, joining in any Spanish words that I thought I caught as we repeated a simple, tuneful melody and swayed in time to the music.

With each attempted step, the hat wobbled dangerously, threatening to send itself to the floor. But I barely noticed, caught up in the energy of that moment and the cheers of the crowd.

Many had observed the gringa dressed in incongruous clothing and hiking boots, a heavy rucksack strapped to her back, who was attempting to stay in time with her new Peruvian friends.

The sheer delight of those around me was echoed on my own face and I knew that, despite my dreadful timing and inability to follow the steps of my companions, I was grinning.

I had wanted to explore barely-visited Peru, learn from the local people who so graciously spoke to me or welcomed me into their cities.

But, most importantly, I wanted to feel like less of an outsider.

I may have been the most visible and out of place person in that chaos of colour and movement, but elegant Ayacucho had welcomed me with open arms.

I had found exactly what I had been searching for.

#PositiveTravel and what it means to be a responsible traveller

It took me a long time to recognise that one of my biggest goals with Worldly Adventurer was responsible travel. I have long been an advocate for travel to lesser-known destinations. Firstly, it eases pressure on those destinations that are becoming increasingly overwhelmed by rapidly increasing tourist numbers, but it also grants a unique window into a country.

Areas that rarely see visitors are, in my experience, often much more authentically representative of day-to-day life. They are also the places where I have experienced the greatest sense of welcome and where I have been allowed to shed – as far as is ever possible – my status as an outsider. 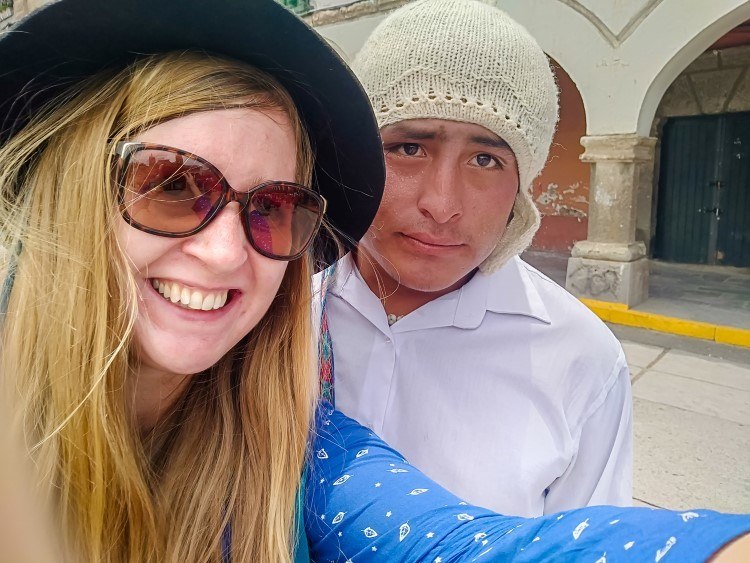 Stopping for a selfie with Rogelio post-dance.

For me, responsible travel has various pillars.

It’s about being environmentally sustainable. This means taking a non-stop flight, rather than a cheaper one with a layover, so that you can reduce your CO2 emissions by up to 50%. It also means choosing to avoid single-use plastic as a means of protecting the environment across the world, but also reducing the plastic impact you have on the one you travel to.

Responsible travel is also about the social and economic impact you have on the people that you meet, simply by opting for responsible tour operators who give back to the community.

But it goes further than that: it’s about the impact that they have upon you.

Trips where you can have those meaningful, lasting interactions with local people, where you recognise that the only thing that separates you is wealth and geography, that you share the same hopes, dreams and ambitions for yourselves and your family, are the most powerful, positive ways of engaging with the world around us.

Responsible travel is about not just being a spectator, trapped behind a camera lens: instead, it’s about being an active player, a dancer who joins the throng.

This article was written in collaboration with Better Places Travel and you can find out more about the incredible work they are doing in the field of responsible travel, or check out the #positivetravel hashtag on Facebook for updates. As ever, all of the opinions on responsible, positive travel are my own.

7 Spectacular & Under-the-Radar Chile Tourism Destinations
← Previous
How to Be a More Responsible Traveler in 2020
Next →
Click here to cancel reply.

I loved this Steph! Such as shame there's no video of your dance. xx

Thanks Flower! I have a video of others dancing - just need to put it up! xx